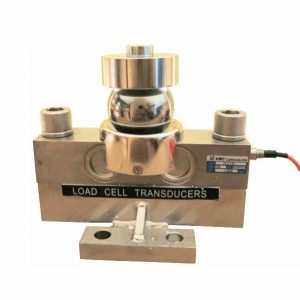 Basic device of the up-to-date weight measuring systems is load cells, construction of which is based on resilient mechanical member which is subject to deformation with overlaid on it strain-gauge bridge consisting of resistive-strain sensors connected in different electric networks.
With effect of external load to sensor as a result of deformation symmetry of measuring bridge is upset and electrical signal proportional to applied effect to sensor is appeared at measuring terminals.
Load cell VLC-121 is one of the most popular models of load cells submitting by manufacturer VMC (USA). It applies for railway and truck scales.
The present model of load cells possesses advantages such as explosion safety, impact resistance and high accuracy.